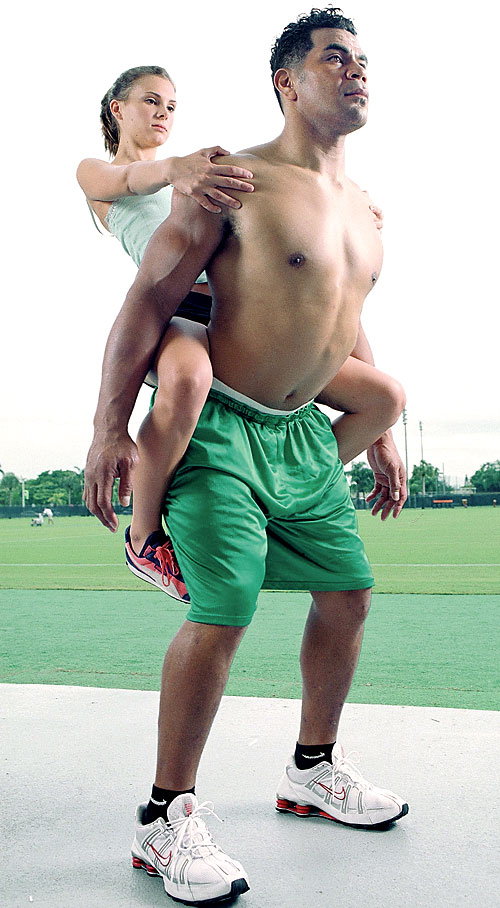 His first major injury behind him, a perennial All-Pro muscles up for a comeback

Dolphins linebacker Junior Seau’s season ended abruptly when he tore his right pectoral muscle in a Nov. 1 game against the Jets. Now, after having surgery, the 12-time Pro Bowler is planning to return for a 16th NFL season — though not before crossing paths with the Beast. That’s Seau’s nickname for Liba Placek, a 49-year-old, 138-pound mother of four who is the director of athletics at the Egoscue training clinic in Del Mar, Calif., near Seau’s hometown of San Diego.

The clinic focuses on postural exercises to enhance body alignment, and for six months of the year Placek is responsible for whupping Seau, 36, into shape. “Liba is such a stud,” he says. “I’d rather face a 350-pound lineman than face Liba and one of her workouts. You know you’re going to get your butt kicked. And she does the workout with you. That’s the sickest part.” Placek’s workouts, which stress balance, posture and symmetrical muscle use, include running on logs in the Patch (a Navy SEALs-type training course) and sprinting 200 yards up what clients call Puke Hill. While Placek insists the hill running is not intended to make anyone sick, Seau says, “If you’re out of shape, that hill will grab you, and you will throw up. About halfway up you start talking to a higher source.” Then there are the sprints Seau does on a dirt course that covers five fairly steep 20- to 30-yard hills. He usually runs it while toting a man his own size or bigger on his back. “I’ve carried the Broncos’ [220-pound safety] John Lynch and the Vikings’ [298-pound tackle] Chris Hovan among others,” says Seau, who before the 2004 season had missed only nine games. He also does some slightly less daunting exercises. Here are the staples of his routine.